Bernardo de Gálvez was born on July 23rd, 1746, in the small town of Macharaviaya in the southern province of Malaga, Spain. When he grew up he decided to join the Spanish military, believing that this was his only way of achieving honor and glory in a time consumed by European warfare. Thanks to his wits and bravery in battle, Gálvez soon caught the attention of his commanding officers and rapidly ascended the military's ranks. The King of Spain eventually promoted Gálvez to the title of captain and awarded him with his own ship and crew. His first task was to patrol and protect the Spanish territories of North America. This was no easy task, of course. Let's not forget that over two thirds of the continent was ruled by Spain, an area that was evidently under constant attack. In fact, for the vast majority of time most of the European settlers living in southern North America were under the domain of Spain and it's sworn protectors, the Dragons of Cuera. These infamous soldiers rode on horseback, wore large sombreros, and protected themselves with leather armor in order to shield themselves against the onslaught of enemy arrows. The Dragons of Cuera patrolled the entire southern United States, from Florida all the way to California. Along the route they built garrisons, which served as both pit stops and bases in case of enemy attacks.

After years of flawlessly obeying orders and getting the job done, Gálvez was finally promoted to general, the highest rank in the military. He was named Governor of Louisiana and given control of New Orleans, the then capital of New Spain. It was during his role as Governor that he learned of general George Washington and his efforts against the British during the Revolutionary War. He immediately took sides against the British and began helping general Washington in any way possible. When the war came to an end and the American Patriots finally declared victory, George Washington made sure that Gálvez and all of his wartime contributions were recognized. On the day of Washington's first presidential inauguration, Bernardo's legendary ship, the Galveztown, was given the task of shooting the thirteen salutes of honor into the air, to commemorate the thirteen colonies and their victories over the British. The canon blasts resonated all throughout New York City, where the ship was anchored for the ceremony. If you listen hard enough you can sometimes still hear the echoes of those blasts: "boom, boom, boom!"

Professor Manuel Olmedo Checa, Vice-president of the Association of Bernardo de Galvez, explaining what a coat of arms is.

The idea of a coat of arms was developed during the medieval ages and was used in many ways as a resume or business card would be used today. The only difference, however, is that only noblemen, men of a certain lineage and/or distinguished war heroes would have the privilege and honor of having one.

In order to receive a new coat of arms, something that came with a lot of dignity and respect, an expert called king of arms would have to start an investigation. The king of arms would delve into the recipient's family history, search for clues about their lineage in library archives, speak with family members to determine their character, and would even go as far as travel long distances to far away towns and cities to try and unearth as much information about the recipient as possible.

To begin designing a coat of arms, the first thing that the king of arms would look for is the origin of the family name.

At first people didn't have last names. In fact, for the majority of human history people were only called by their first names. To distinguish people with similar names, however, people started describing themselves with a little background information as a way of differentiating one another. It began with something as simple as "Andrew son of the baker" and over time evolved into the common last name of "Andrew Baker". As populations grew, last names became more common out of necessity. In Spain, the first last names to appear came from people adding the letters EZ to either the name of their hometowns or the name of their fathers. Therefore, someone whose fathers name was Gonzalo suddenly became Gonzalez. In the case of Galvez, they created his last name by adding an EZ to the end of his family's hometown, Galva, a small village in the Spanish province of Vizcaya.

Knowing how his last name came to be is essential to understanding Galvez's coat of arms. If you take a closer look at it you will find a depiction of the small town of Galva in the center. We can admire its famous tree, an oak that was already one thousand years old, and two wolfes, which were very common to the surrounding areas of Galva.

After the family's place of origin is determined and drawn onto the coat of arms, other notable images are also added such as those that best describe the family's character.

On the bottom of the shield you will notice a few different symbols. These suggest that Gálvez was awarded the title of nobleman for his military merit. Here we can see a helm (soldiers helmet), canons, flags, trumpets, drums, a bow and arrow, and even a tomahawk (war axe used by native Americans).

Around the shield you can see a white and blue ribbon, which represents the Royal and Distinguished Order of King Carlos III. To this day this remains the highest military award in Spain.

As the Gálvez family tree grew over time, so did the number of last names associated with the family. Through various marriages the last names Madrid, Cabrera and Marquez made it into the coat of arms. This is how we can distinguish each one: 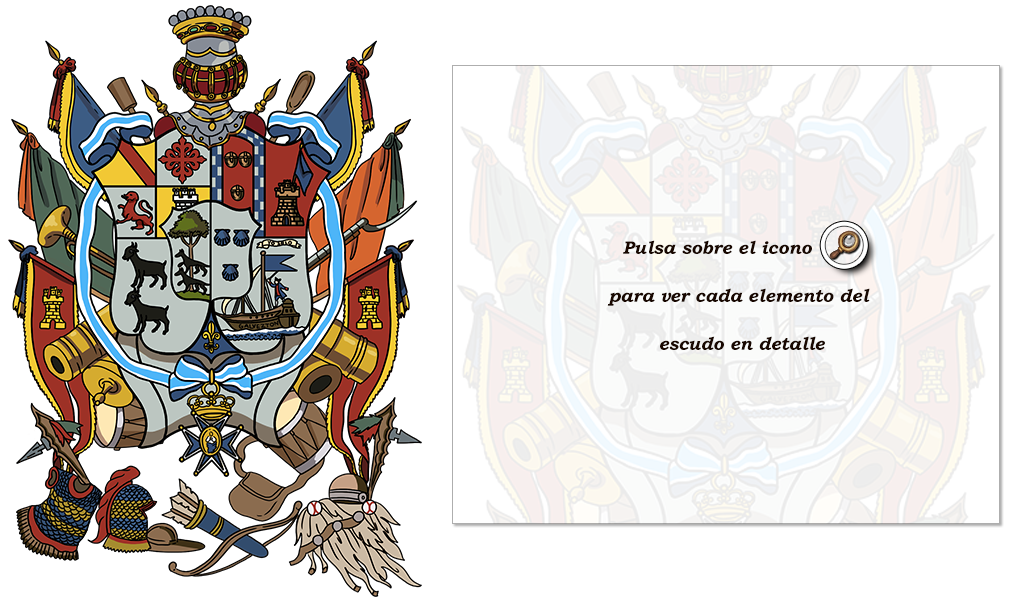 Other items displayed on the coat of arms are there to symbolize Galverz's accomplishments as Governor of Louisiana.

Manuel Olmedo Checa is vice president of the Bernardo de Gálvez Association www.yosolo.org.
Professor Olmedo was the researcher who found the document by which the first representatives of the USA were committed to hanging the Gálvez painting in the Congress in the archives. You can contact him at vicepresidente@yosolo.org

Beginings of his military career in America

Galvez arrived in New Spain in 1769 with the initial task of defending Spanish territories against attacks from the Apache Indians.

Captain of the Dragons of Cuera

Bernardo de Gálvez was the captain of the Dragons of Cuera, the regiment in charge of patrolling the borders of New Spain in North America.

They were called dragons because of how fierce they were and cuera because of the leather jackets they wore. Cuero means leather in Spanish. These jackets were made up of seven layers of deer hide to ensure they could protect themselves against incoming arrows.

The Dragons of Cuera travelled on horseback all along the Southern US border. They travelled from garrison to garrison from Florida all the way to California, protecting New Spain from Indian attacks. Each soldier travelled with six horses, in order to always have a few well rested, in case they had to go into battle.

General Bernardo de Gálvez was in charge of the army of Louisiana. Under his command he had both officers and regular foot soldiers.

To be an officer you needed to have been born in Spain or in one of its allied countries, such as Ireland, Belgium, France, or Italy.

Regular soldiers were born in the Americas and they were subdivided into five catergories:

The influence of the Galleon in America

Galleons first appeared in Spain in the middle of the 16th century and were considered to be enormous for their time. They were twice as big as their predecessors (such as the ships used by Cristopher Columbus and Magellan), and could weigh anywhere between 500 and 1200 tons. They carried essential supplies needed to build cities in the Americas, and brought gold and other riches discovered back to Spain. The construction of the galleon was considered to be a national secret and so to prevent other countries from learning how to build them they forbid any shipwright (person who builds boats) from leaving the country.
These are the important terms to understand what a galleon was like:

Cargo: The interior of a galleon

Life aboard a galleon

The spanish influence in the United States